The Airport is a Community building in CityVille. It will bring both tourists and work like a pier for goods supply. If it's removed, it will go back into your Inventory.

The Airport is a gradually upgradeable building which increases its functionality as it is upgraded. Initially it will have a Cargo Terminal which brings goods. The completion of the airport will also require the construction of three other terminals and at least 2 extensions.

According to Zynga's Board all planes may now be stored in the Warehouse.

On Jan 23, 2012, an airport teaser was implemented onto players' gameboards. It showed a yellow plane circling around with a plane tag. When clicked it gave the following message:

Cargo Planes run routes from the airport and trade coins for goods.

Passenger Planes run routes from the Airport and trade goods for tourists and coins.

Vacation Planes run routes from the Airport and collect Experience Points on the way. For each neighbor who gets on your plane, more experience is given.

In August 2011, CityVille Player Steven " Provincia" submitted a story into a story line contest which mentioned airports and all the steps to complete one, which won the contest. 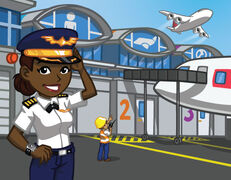 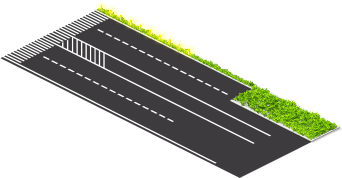 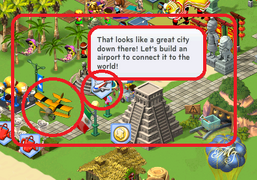 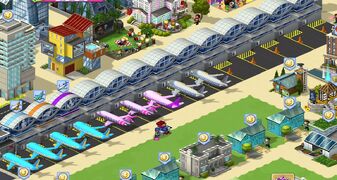 Hope this answers a few questions.
Add a photo to this gallery
442px
Retrieved from "https://cityville.fandom.com/wiki/Airport?oldid=189730"
Community content is available under CC-BY-SA unless otherwise noted.