Trains are a utility provided to players as another source of goods supplies. They are maintained by Conductor Charlie. Unlike shipping and farming, trains can be used to both buy and sell goods.

Trains are controlled using the Train Platform on the other side of the train track from the main starting zone. The ability to use this feature is unlocked when the player has 5 or more neighbors. A player is required to click on the platform and select from the 8 menu options at the bottom of the screen to buy or sell their goods. The amount of goods or coins received has a base amount of earning plus more for how much help is received by friends. If every stop possible for a schedule is filled, the player will get the amount of goods or coins stated on the buying screen for that particular schedule. A wall post is generated to allow friends to help out. There is a limit to how many of these help requests can be posted per day.

Trains will net 8-10 coins per good (excluding Movin' Maxine which is 2.7 coins per good) assuming all stops are filed. The most efficient business will net 5.5 coins per good but can be increased by decorations. Selling goods is therefore not necessarily the most goods efficient method to get coins but it does not cost any energy. It is possible to alternate buying and selling Locomotive Lori and Chuggin Dustin schedule in order to freely increase coins or goods even with no stops. The same strategy is also possible with Choo Choo Charlie but requires at least 1 stop to be profitable.

On March 5th 2012 an upgrade to the Train Platform was released which includes Tourist schedules, there are 4 contracts similar to the buying and selling schedules.

The Transylvania Tours was only available during the Halloween (2012) Event.

On March 25, 2013, eight more routes were added with the addition of The Alps. Each type of route can be unlocked as you complete/progress through individual goals in the

After March 18, 2011 the player no longer has to select which friends to send a train fare request to and instead uses a wall or stream post. Any friend who responds to the post receives 25 goods and an item from either the Train Collection or Rare Train Collection. Only the first 2 or 4 friends to respond will get the goods and gift.

Players can only send one train at a time, and must wait for a train to return before they can use it again. Once a train has left the station, there is no way to cancel it. Unlike crops and ships, visiting neighbors can't help to speed up the train. Also unlike other methods of good production, supplies on trains do not "wither" so, even if a player orders a 4 hour train and doesn't log on for 3 days, the goods will still be available for purchase. Trains also do not require energy to collect from. Train output can be increased once by 10% by turning in the Rare Train Collection which is applied to the payout when the train has completed its run. It will not show up on the windows before or during the train's travels.

Clicking on the platform will tell how long the train has remaining and how many stops have been filed. You can also speed up the train by X% using 8 cash. The player can use cash to fill a stop. 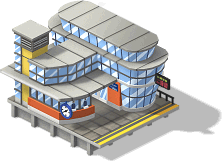 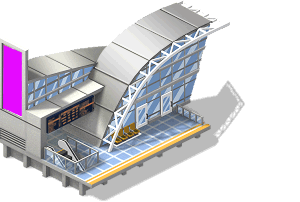 "Send Trains!" is a goal set by Conductor Charlie, and the objective is to send 3 trains. If the player sends the fastest trains, this quest should take 15 minutes to complete as the shortest train journey is 5 minutes. The reward is 100 coins.

In "Date On Track" the objective is to send 10 trains. The reward is 100 goods. This should take 50 minutes sending the fastest trains.

The objective is to implement the new upgrades to the train station and routes that were released in March 2012.

Upgrade Announcement
Add a photo to this gallery
Retrieved from "https://cityville.fandom.com/wiki/Train?oldid=181868"
Community content is available under CC-BY-SA unless otherwise noted.